The enzymes naturally produced in the rumen can’t get to all the feed to break it down, so what do we do with the rest?  Let it go to waste?  That’s where Rumagentin™:  excels.  All that feed and valuable protein would otherwise go to waste and be expelled in the feces.  The specific blends of protease enzymes in Rumagentin™ add the extra digestive power to breakdown and extract the otherwise unusable protein material from feed.  Rather than paying to add additional protein material to the feed for rumen bypass, Rumagentin™ is designed to extract existing proteins and amino acids to make the most of the feed you have already purchased. Dry matter intake (DMI) is fundamentally important in animal nutrition because it establishes the baseline amount of nutrients available to the animal.  This does not follow that all the nutrients are extractable and will be utilized.  Every biological system is, to some degree, inefficient.  Meaning, that processes never work at 100% efficiency and therefore generates waste.  In animals, the undigested DMI is simply expelled in the feces.  In order to counteract this problem, many products have been designed to add additional nutrients, specifically rumen bypass proteins to the feed.  Rumagentin™ takes a different, more efficient approach.   Why not utilize the existing nutrients and proteins in the DMI already being fed?  A specifically designed blend of proteases was developed for this purpose.  Acting to target the specific protein material within DMI, Rumagentin™ acts to release more protein and amino acids from the feed so the body may more efficiently absorb the nutrients. A field trial at Iowa State University, demonstrated the improved feed efficiency of Rumagentin™:  On a trial of 96 cows matched by parity, days in milk and previous milk production, the control and experimental groups were formed.  After feeding 4g/cow/day for a 21 day experimental period, there was a 7 day washout prior to switching control and treatment groups for another 21 day experimental period.  The results of the experimental and control groups were then compared, statistically analyzed, and are listed in the following table. 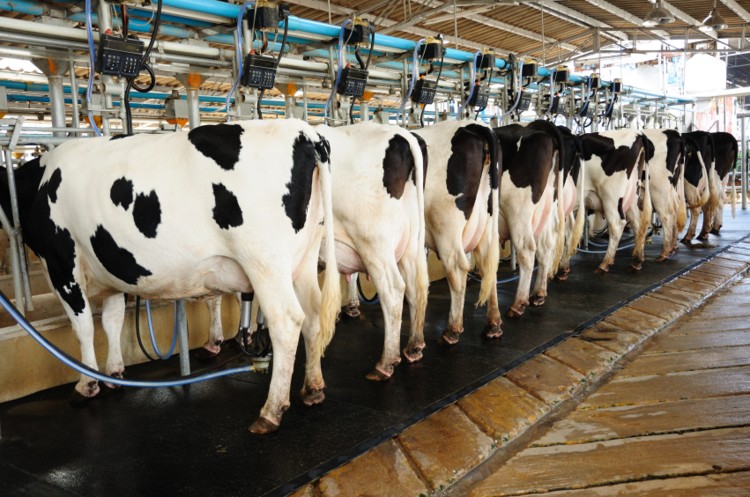 In a time where saving and efficiency is becoming increasingly important in a struggling economy, Rumagentin™   provides a novel, cost-efficient alternative to expensive rumen bypass proteins already on the market.  Designed to extract more amino acids from the same amount of DMI, Rumagentin™   improves amino acid extraction and has been shown to significantly decrease overall DMI. Rumagentin™, along with proper DMI or feed blend can help improve nutrition and give you more product for your dollar.  Compared to other marketed rumen bypass proteins, Rumagentin™ is offered at approximately 30% less cost.  The question then is not “Can I afford it?”  but,  rather “Can I afford to not use Rumagentin™?”

THE FOLLOWING IS A STUDY BY:

OF OUR SPECIFIC PROTEASE ENZYME BLEND (Rumagentin) USED IN THE FEED SOURCES PRODUCT:

Ninety-six multiparous lactating Holstein dairy cows (2.7±1.6 parity, 153.8±103.7 DIM, 40.3±5.9 kg milk/d, 624±62 kg BW) housed in a free stall barn (ISU Dairy) were blocked by parity, days in milk and previous milk production and randomly assigned to a control TMR or a TMR containing a blend of supplemental protease enzymes (4 g/cow/d; Rumagentin™, Feed Sources LLC, Alta Loma CA). The TMR consisted primarily of corn silage, alfalfa hay, dried distiller grains, and concentrate and did not contain supplemental by-pass protein. Cows were housed 24 to a pen (4 pens total) and thus pen was the experimental unit in a crossover design with two 21-d experimental periods. Two pens received the supplement during period 1 and the other two pens received the control. Pens then switched treatments during period 2 and there was a 7 d washout between periods. The 7 d immediately prior to period 1 were used as a covariate in the statistical analysis (repeated measures in the Proc Mixed procedure of SAS). Daily pen milk yield and DMI were recorded and milk composition from all cows was determined on d 15, 17, 19 and 21 of each period. All data was condensed into weekly means. There was no treatment effect on milk yield (37.6 kg/d), but supplemental enzyme-fed cows had less DMI (0.93 kg/d; P < 0.05) compared to controls and therefore tended (P = 0.08) to have improved (13%) feed efficiency (solids corrected milk/DMI). Protease treatment had no effect on milk fat (3.53%) or milk protein (3.24%), but tended (P = 0.08) to increase milk lactose (4.73 vs. 4.76%). Feeding supplemental enzymes tended (P = 0.10) to decrease milk urea nitrogen levels (15.1 vs. 14.6 mg/dl) but had no effect on milk SCC. Under these circumstances it appears that supplementing a proprietary blend of protease enzymes improves feed efficiency and may enhance feed nitrogen utilization in lactating dairy cows.